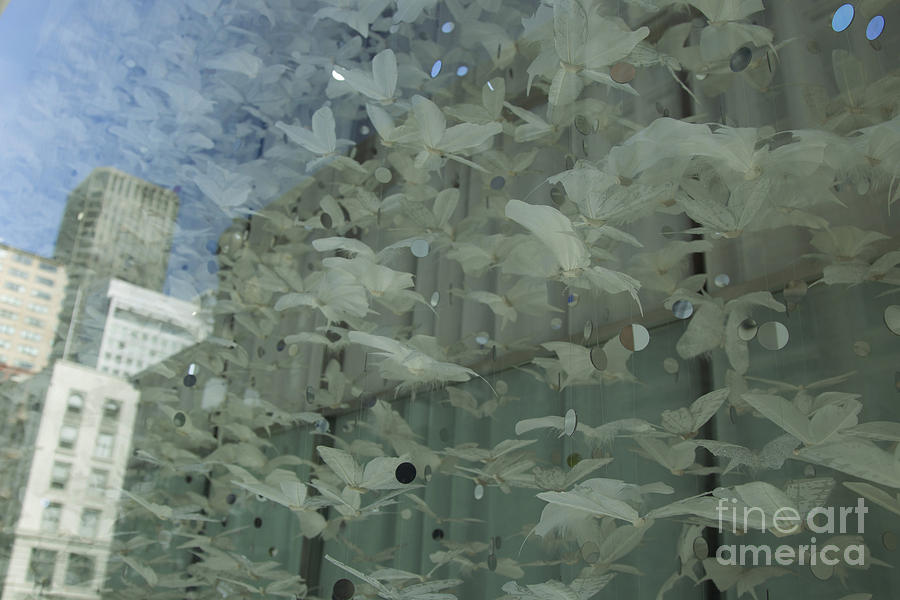 In Bay City Reflections, buildings in San Francisco’s financial district are reflected in the beautiful store window along with its own light, airy design.
San Francisco is that famous city by the bay in California, USA. The city is actually is the only combo or combined city and county in California, the densest city by population and the smallest county. . The first known human habitation here precedes the Spanish by thousands of years. Earliest archaeological evidence checks in around 3000 BC.
The Spanish arrived in 1776, establishing the original Presidio and a Mission. In 1846, San Francisco and the California territory were ceded to the United States at the end of the Mexican-American War.
The influx of people during the California Gold Rush in 1848-9 soon made San Francisco the largest city in the West, its population going from 1000 to 25,000 in about a year. The gold rush wealth brought the banks to the city, followed by the railroad and business. San Francisco is known as a world-wide financial center. Interesting to note that in the aftermath of the stock market crash in 1929, not one of San Francisco’s bank failed.
In 1906, a major earthquake and the following fire wiped out three-fourths of the city and most of the downtown core. Although half of the city was rendered homeless, the city was quickly rebuilt with an infrastructure that continues to support it today..
The city is known for its eclectic, liberal mix of culture and architecture and is a popular tourist destination. There are many well-known landmarks in the city including its famous orange bridge, the Golden Gate, the island penitentiary of Alcatraz, cable cars on nearly vertical hills and districts like Chinatown and the Financial District.
Jeanette French, paintings, photographs, canvas prints framed prints, metallic prints, acrylic prints, greeting cards, gift cards, fine art.
Creating portals of light, love, joy, beauty, compassion, hope and gratitude is my lifelong passion and gift for the earth, hence the name of my art business, For the Earth. My mother painted in oils when I was young and encouraged my own drawing, painting and handcrafting in all forms. My father, the photographer, gave me my first camera at age 8. As a result of these loving influences, I am a lifelong student of both mediums. I am grateful to my wonderful Pacific NW painter teachers, Stan Capon and Edi Olson, for training my eye and technique. I hope you will enjoy this image as much as I enjoyed its creation. More gifts for the earth can be found at these websites: jeanette-french.artistwebsites.com and jeanette-french.pixels.com.