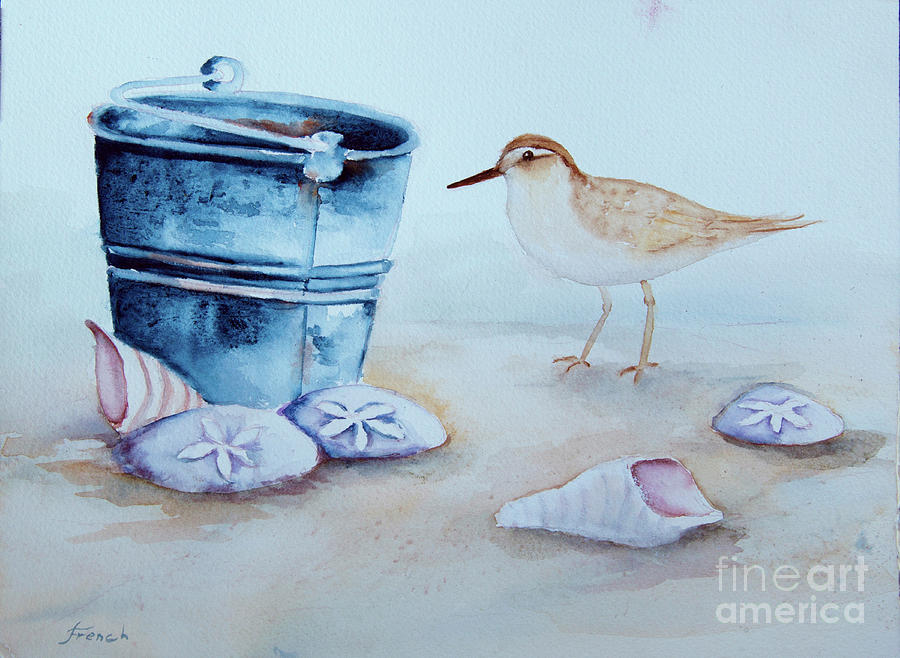 This original painting is currently for sale.   At the present time, originals are not offered for sale through the Jeanette French - Website secure checkout system.   Please contact the artist directly to inquire about purchasing this original.

Beach Combing is a watercolor capture of lazy summer days walking along the shore looking for treasures. True beachcombers continually return to the edge of the land and sea to see what gift might appear. Here a sandpiper is investigating the finds.
The beach is the shoreline at the edge of a body of water. The landform of the beach is often composed of loose particles like sand, pebbles, shells and shell fragments, the result of the endless deposit and scouring actions of wave and current and the continual turning up of treasure.
The natural, cyclical, tidal rise and fall of sea levels is generated by the gravity pull of the Moon and the Earth alignment, the Earth’s rotation, the pattern of the deep ocean tides, the shape of the coastlines and the depth of the near shore. Tidal variations include two almost equal high tides and two low tides per day, a semi-diurnal tide; one high and one low tide per day, a diurnal tide; or a mixed tide, in which there are two uneven tides in a day.
Surf is the wave action that is occurring in the area between the shoreline and the outer edge of the breaking waves. This is where the word “surfing” came from. Surf can also apply to the waves that are actually breaking in shallow water or on the beach.
Chambered Nautilus Shell. When cut open, the structure of an almost perfect equiangular spiral is revealed. Nautilus shell spirals are logarithmic spirals with ratios averaging 1.33 to 1. These shells have sometimes been used as examples of golden spirals, however the golden spiral ratios is a bit different at 1.618 to 1. Nonetheless, the spiral is beautifully crafted by the nautilus, one of the oldest known cephalopods. The oldest fossils found are from the Early Pleistocene time period. Spirals symbolize growth and evolution; the cycle of birth and death; beginnings and endings, surrender and release of rigidity; movement between inner and outer worlds and the path from ordinary to deep intuitive understanding of reality..
The poet, Oliver Wendell Holmes, paid homage to the inspiration and mystery of the nautilus. The conclusion of his poem borrows the spiral form as a metaphor for spiritual life, growth and death:
…Build thee more stately mansions, O my soul!
…As the swift seasons roll!
…Leave thy low-vaulted past!
…Let each temple, nobler than the last,
…Shut thee from heaven with a dome more vast,
…Till thou at length are free,
…Leaving thine outgrown shell by life’s unresting sea!