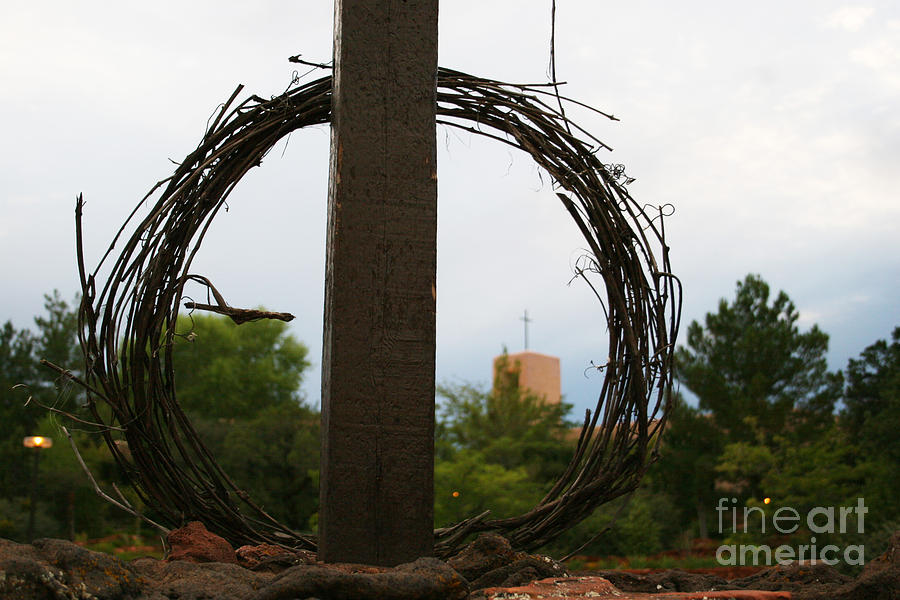 This image of a cross in Santa Fe, New Mexico..
The Cross is one of the most ancient of human symbols. It has represented the four basic elements: earth, air, fire, and water. It has also been used to depict the point of union of divinity, the vertical line, and humanity, the horizontal line.
The Christian Cross is widely known as the symbol of Christianity. It serves as a reminder for Christians of God’s love and the sacrifice of His own Son for humanity and the victory over sin and death.
The Easter celebration date moves in time from year to year, unlike other fixed holidays. The first Sunday after the full moon on or closest to march 21st was chosen for the date by the Council of Nicea, so the date varies between March 22nd and April 25th. Easter Christians, who use the Julian calendar, celebrate between April 4th and May 8th.
The cross is a prominent feature in feast of Easter and the Holy Week that precedes it. These ceremonies recall the events leading to the crucifixion and death of Jesus and His resurrection from the dead. Easter Sunday celebrates His resurrection from the dead.
Easter customs are practiced around the world, including sunrise services; decorating Easter eggs as symbols for the empty tomb; and using the Easter lily as a symbol of resurrection.
Some other familiar celebrations that are enjoyed around this holiday do not necessarily have religious connections. These include the celebration of spring, the Easter Bunny, Easter egg hunts and Easter parades.
Spring, a time of growth, renewal, rejuvenation and new life, is the climatic season that follows the typically three coldest months of the year, winter, and precedes summer, typically the three warmest months of the year. Meteorologists usually define three month season of spring as March, April and May in the northern hemisphere and September, October and November in the southern hemisphere. In either case, spring is the result of increasing warmth from the change in the orientation of the Earth’s axis in relationship to the Sun. The astronomical March Equinox is frequently used as the marker for the first day of spring in the north. Erratic, unstable and severe weather patterns are most common in the spring due to the collision of warm and cool air masses. In the U.S., Tornado Alley is most active at this time of year.
In some regions in the Northern Hemisphere, the astronomical March equinox (varying between 19 and 21 March) is taken to mark the first day of spring, and the Northern solstice (around 21 June) is taken as the first day of summer. Human beings have celebrated the return of the lengthening days of light and the increasing warmth with festivals from the beginning of time. Some of these celebrations include Carnival – South America, Easter - Christian, Passover - Jewish, Holi – Nepal, India, Mayday, Beltane - Europe, Sinhalese New Year – Sri Lanka and Nevruz -Turkey.
Jeanette French, paintings, photographs, canvas prints framed prints, metallic prints, acrylic prints, greeting cards, gift cards, fine art.
Creating portals of light, love, joy, beauty, compassion, hope and gratitude is my lifelong passion and gift for the earth, hence the name of my art business, For the Earth. My mother painted in oils when I was young and encouraged my own drawing, painting and handcrafting in all forms. My father, the photographer, gave me my first camera at age 8. As a result of these loving influences, I am a lifelong student of both mediums. I am grateful to my wonderful Pacific NW painter teachers, Stan Capon and Edi Olson, for training my eye and technique. I hope you will enjoy this image as much as I enjoyed its creation. More gifts for the earth can be found at these websites: jeanette-french.artistwebsites.com and jeanette-french.pixels.com.

Wonderful! Congratulations on your feature in The Gallery Wall for the weekly theme Faith!

Congrats on your feature in The Gallery Wall Group! l/f

Congrats on your feature in The Gallery Wall!!

Congratulations on your feature on The Gallery Wall!

Congradulations on your feature in the group THE GALLERY WALL !

Congratulations on your feature in the Gallery Wall. LF

Congrats on your feature in The Gallery Wall Group!!!

Congratulations on your feature in The Gallery Wall. Excellent work l/f

Congratulations, Jeanette, your marvelous artwork was selected to be exhibited on the homepage of THE GALLERY WALL where our theme this week is all about "Faith."