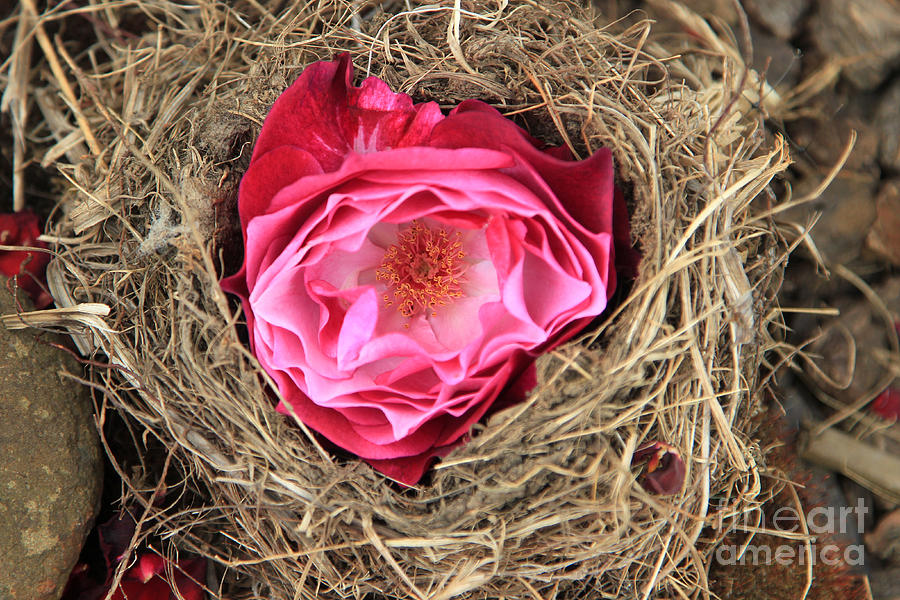 It was an irresistible inspiration to nestle this lovely rose in a bird nest. The image continues to fascinate me with its contrasts: soft/rough textures, rich shades of pink color/ neutral beige￿and the fragile rose nesting.
Nesting can refer to having a nest and this lovely blossom does. This nest was constructed by a blue jay in the spring, as a structure to protect its eggs and its hatchlings from danger and the sun and the spring rains. The blue jay parents gathered, transported and assembled the various materials to create their unique structure. Transporting the materials requires the most time and energy, so the birds commonly use what is available in their most immediate environment. This nest is composed of organic materials, small twigs, dried grass and leaves. Originally, it was located about fifteen feet off of the ground in an arborvitae tree. Nest complexity is somewhat correlated with the level of care the adult birds provide for their offspring. This is a relatively simple nest, constructed for one season.
The blue jay common to the Portland, Oregon area is the Western Scrub Jay. Its head, tail and breast band are deep blue, with brownish patches on its back. Its chin, breast and belly are a dull white and it has a very long tail. The bill, legs, and eyes are black. The juveniles are similar in coloring to the adults with lighter blue wings and tail. Males and females are of the same coloring, though the male is a bit larger in size. Their nest is a cup shape that the male and female build together. The female lays 3-6 pale green eggs with red brown markings once a year. The young fledge in 18 to 20 days and are fed by both parents. This bird does not migrate. It feeds on insects, fruit and seed feeders, where available, and caches food by burying it for later consumption. This behavior likely serves as a major distribution channel for oak and pine trees, as the birds do not return to eat all of the seed they bury. The bird pair forms a long term bond, with the male feeding the female before and during incubation of the eggs. The fledglings remain close to the parent pair for several years, helping the parents to raise subsequent brothers and sisters. The name, jay, derives from its noisy, garrulous nature. Blue Jays prefer a habitat of mixed woodlands and has expertly adapted to human activity.
This gorgeous rose bloom is a hybrid tea rose named, Duet. It was first introduced in 1960 and was an AARS winner in 1961. Its ARS rating was 8.2. Duet is a prolific flower producer. It blossoms in urn-shaped buds that open up into a bi-color bloom with salmon-pink inside and rose-crimson outside, hence its name, Duet.
The rose is actually considered a woody perennial of the genus Rosa. There are over 100 species and exhibit several forms including, miniature shrubs, erect shrubs and climbers that reach 7 meters in length. The flowers have a variety of shapes and sizes and are usually quite showy. The colors range from shades of white, through yellows, oranges, pinks, reds and the newer purples. Cultivars and hybrids are cultivated for their beauty and fragrance. Most roses are deciduous, with serrated leaves that alternate on the stem. Roses are pollinated by insects in nature. Some of the older roses produce a berry-like structure called a rose hip. These are known to be rich in vitamin C and provide food for birds when not harvested by humans. Rose ￿thorns￿ are not actually true thorns, modified stem structures. Rose ￿thorns￿ are actually ￿prickles, outgrowths of the epidermis, the outer layer of the stem. The prickles are often sickle-shaped hooks that support the rose stem growth.
Roses are very popular ornamental garden plants that have been cultivated for millennia. The earliest known date is around 500 BC in the Mediterranean and the Far East. Most of the hybrids are bred for their flowers and scent. Attar of roses or rose oil is used by commercial perfumers to produce perfume and rose water for cooking, cosmetics, medicines and some religious practices.
The rose has long been the gift of lovers, a symbol of love.

Thank You for Submitting your Artwork.... Liked the subject, description, technique, composition, and color... So Today it was Published in the Internet publication ARTISTS NEWS.... YOU or Friends Can use Ctl-C to copy the link: http://paper.li/f-1343723559 and Ctl-V to put it into your the Browser Address bar, to view the publication. Then, Tweet, FB, and email, etc a copy of the publication, to just anyone you feel would be interested. Happy Promoting! :-)