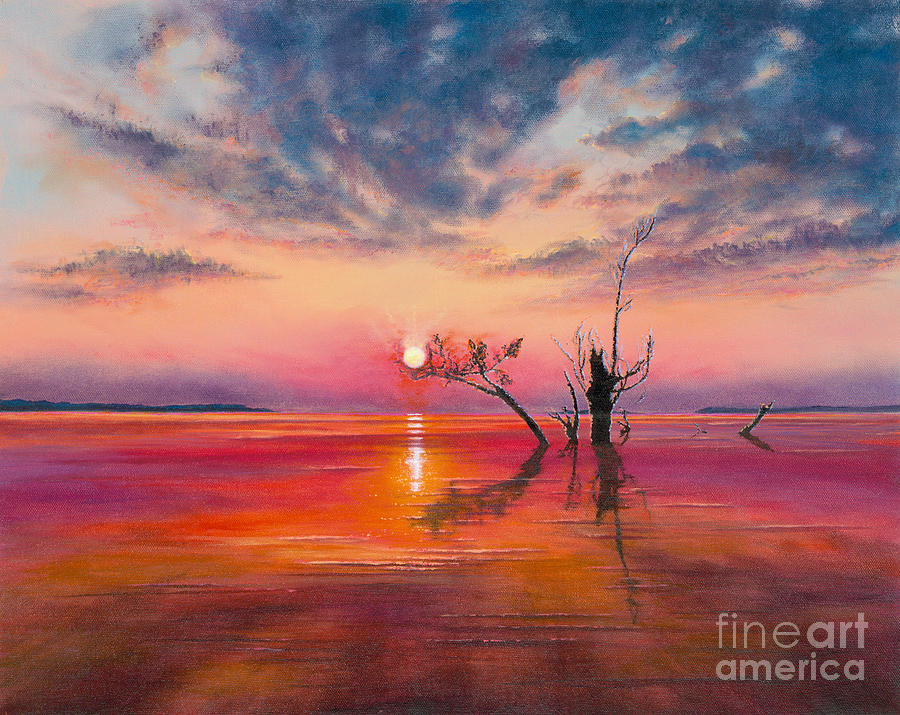 A honeymoon in Brazil, awakening to the gorgeous dawn over the Amazon River and a new journey of a lifetime together…this painting is a capture of that lovely experience.
Dawn come from the old English verb, dagian, which means “to become day”. The term designated the time that marks the beginning of visible light, known as twilight, while the sun itself is still below the horizon line. Sunrise, on the other hand, is the moment when the leading edge of the sun actually becomes visible above the horizon.
It is interesting that the duration of that twilight time between the first light of dawn and actual sunrise varies greatly, depending up where in the world one is observing this phenomena. In equatorial regions, the twilight may last only 20 minutes; whereas, in the polar regions it may last many hours and at the actual poles, several weeks. The twilight dawn to sunrise sequence is also faster at the times around the equinoxes and slowest during summer and winter solstices in all places on earth. There are actually three different definitions for the start of dawn, all of which are distinguished by the amount of sunlight present and correlated to the angle of the sun below the horizon in the morning.
Astrological dawn is experienced by most people as still night, although it is the moment when they sky is no longer completely dark low above the horizon in the area the sun will rise. This timing occurs when the sun is still 18 degrees below the horizon. When there is enough sunlight on the horizon for some objects to be distinguishable, nautical dawn has arrives. The sun is 12 degrees below the horizon at nautical dawn. When there is no darkness in any direction, including zenith, the bright sky will signal civil dawn. The sun will now be at 6 degrees below the horizon and there is enough light for objects to be seen and outdoor activities to begin.
The magnificent Amazon River, the second longest river in the world, is considered to be the largest river by water flow volume, 209,000 cubic meters per second. It also boasts the largest drainage basin in the world, 2,720,000 square miles. The river enters the Atlantic Ocean in a vast estuary of about 150 miles in width, where it is sometimes known as “the River Sea”.
In this painting, the Amazon River is seen as it passes through Brazil, the largest country in the Americas. Originally a colony of Portugal, from 1500 to 1822, Portuguese is the common language. Independence in 1822 formed the Empire of Brazil, governed by a constitutional monarchy and a parliament. The country is now defined as a federal republic by its current constitution. Brazil is major player in the world economy, as well as a protector of natural habitats.

Colors I feel on ABC! L/F

This is simply gorgeous Jeanette! I can see why it's in you most popular collection. Wonderful colors and beautiful composition.

Stunning. I love your painting! Voted.