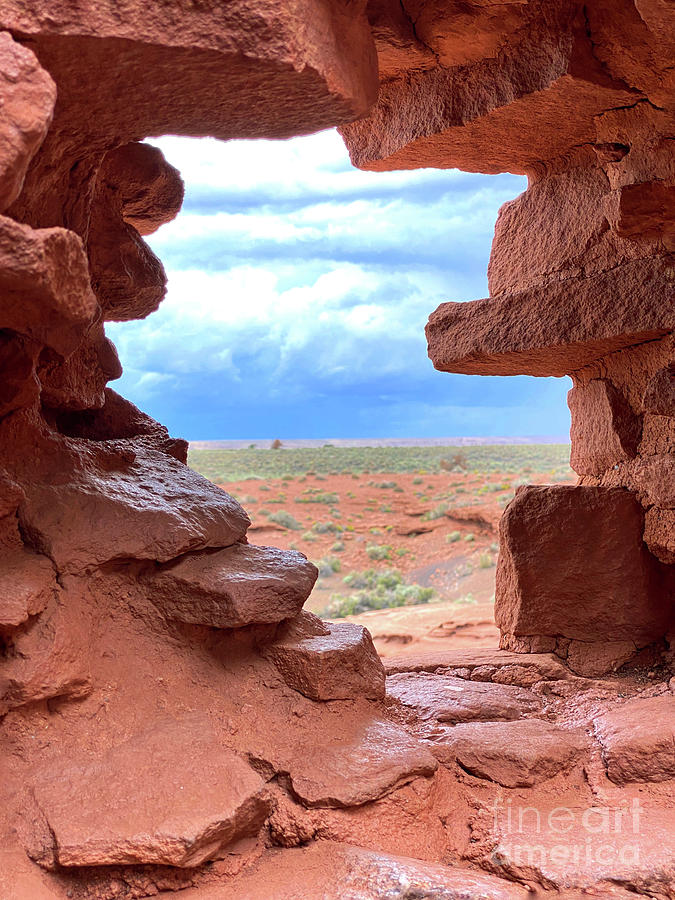 The View from Wukoki Pueblo image was taken in September in Arizona amid sporadic thunderstorms, giving the spectacular cloud effects. From inside the pueblo ruins, one sees the desert landscape and approaching storm beyond. Wupatki National Monument is the home of ancient pueblo dwellings. The monument is located on the southwestern Colorado Plateau, west of the little Colorado River just northeast of Flagstaff, Arizona. This is a volcanic landscape, shaped by six million years of volcanic activity, the last eruption between 1040 and 1100. In the 1100’s thousands of indigenous peoples were perfecting arid farming on this land.
Pueblo homes ranged from single story to multilevel, high-rise dwellings with as many as 100 rooms. Made of sandstone, limestone, and chunks of basalt, despite the arid landscape, several buildings remain intact more than 700 years after they were abandoned. By 1250, the pueblos were empty and the Wupatki peoples had moved on. Wuparki Pueblo is the largest remaining structure, with 100 rooms, a tower, a ceremonial ball court, a ceremonial structure, a large plaza and community room housed a village. It was occupied between 110 – 1200. And was located along major trade routes linking large populations in the northeast and to the south, well situated for trade. A landmark, gathering place and ceremonial center and thriving community. Hopi, Zuni oral histories say it was a place where diverse peoples gathered. Pottery has been found from the northeast and shell jewelry from the far south
Wukoki - was home to two or three families, believed to be of the Anasazi culture and was occupied around 1120-1210. This three-story structure, with a view of the terrain, sits atop a Moen sandstone outcrop and was visible for miles. A plaza on the south side likely was used for food preparation, pottery making and perhaps a child play area

I have this exact picture but yours is much nicer with the sky! It is a wonderful Pueble! FL