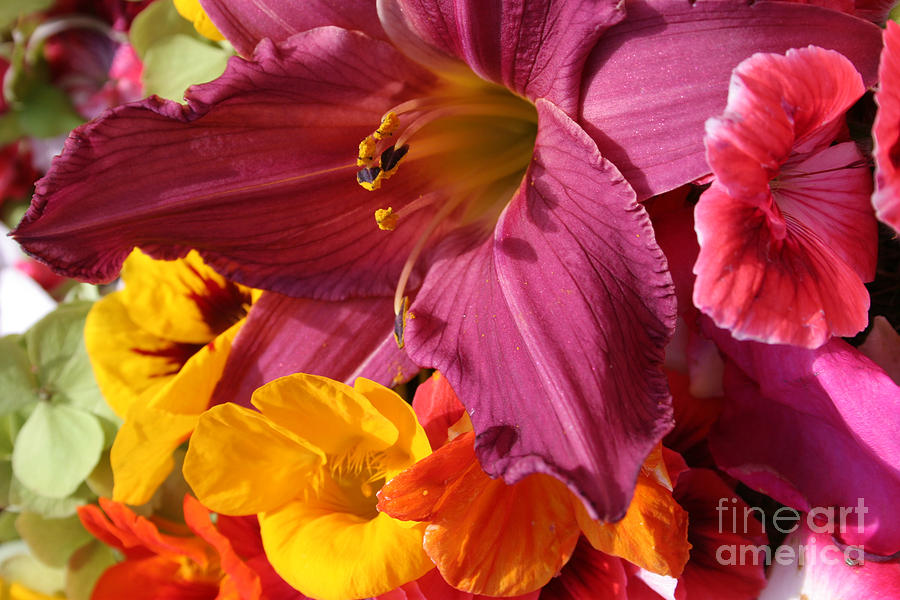 Lily was photographed among nasturtium friends in a home garden.
Lily’s heavenward gaze is in alignment with higher beings, including Quan Yin, Mother Mary, Venus, and angels. Lily is a long time symbol of this alignment with Divine energy, purity and protection and the increasing harmony that results. Her essence is simultaneously delicate and daring, a beautiful invitation to spend time with the energies of the Divine Feminine.
Lilies are a popular group of tall, perennial, flowering plants that grow from bulbs and all have large and often fragrant flowers in the late spring and early summer. Most of the species find their origins in the northern hemisphere. Their favorite habitats are woodlands and sometimes grasslands. The flowers are a trumpet shape and range in the warm spectrum of color: white, yellow, orange, pink, red and purple.
In the garden, there are many hybrids, some characterized by flowers that have markings or spots, like the Tiger Lily. The following groups are the most well-known. Asiatic hybrids have upward, outward flower faces and are usually without scent. Martagon hybrid flower heads nod their Turk’s cap forms. Trumpet lilies, face out and slightly down and are especially fragrant, often also at night. Oriental hybrids, crossbred from more than one Japanese species, are known to florists as Stargazers, as their large fragrant flower heads turn heavenward.
Beautiful pansy has a clear magical mission to magnify the amount of divine beauty in the world. Nearness to pansies assists humans in attuning our thoughts to the frequencies of beauty. Pansy is a popular garden flower addition. A member of the viola species, she has four petals pointing upward and one down, as opposed to violets, which have three petals pointing upward and two pointing down.
Spring, a time of growth, renewal, rejuvenation and new life, is the climatic season that follows the typically three coldest months of the year, winter, and precedes summer, typically the three warmest months of the year. Meteorologists usually define three month season of spring as March, April and May in the northern hemisphere and September, October and November in the southern hemisphere. In either case, spring is the result of increasing warmth from the change in the orientation of the Earth’s axis in relationship to the Sun. The astronomical March Equinox is frequently used as the marker for the first day of spring in the north. Erratic, unstable and severe weather patterns are most common in the spring due to the collision of warm and cool air masses. In the U.S., Tornado Alley is most active at this time of year.
In some regions in the Northern Hemisphere, the astronomical March equinox (varying between 19 and 21 March) is taken to mark the first day of spring, and the Northern solstice (around 21 June) is taken as the first day of summer. Human beings have celebrated the return of the lengthening days of light and the increasing warmth with festivals from the beginning of time. Some of these celebrations include Carnival – South America, Easter - Christian, Passover - Jewish, Holi – Nepal, India, Mayday, Beltane - Europe, Sinhalese New Year – Sri Lanka and Nevruz -Turkey.
Jeanette French, paintings, photographs, canvas prints framed prints, metallic prints, acrylic prints, greeting cards, gift cards, fine art.