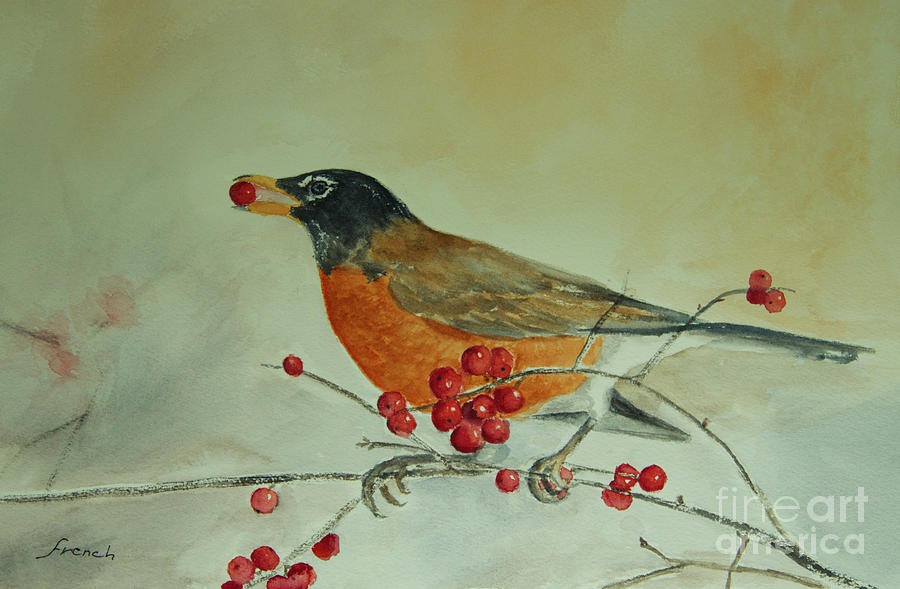 This original painting is currently for sale.   At the present time, originals are not offered for sale through the Jeanette French - Website secure checkout system.   Please contact the artist directly to inquire about purchasing this original.

The Robin Spring Harbinger image is a watercolor painting of a robin harvesting the last of the winter berries.
These winged ones are American robins, members of the thrush family. They are migratory birds found all throughout North America. Robins are one of the three most abundant land birds on the continent. The song of the robin is often one of the first heard at dawn in the spring and is considered the harbinger of spring. The male is the singer of the cheerful song that varies throughout the day.
Robins are colorful with a dark head, black to grey, white arcs around the eyes, a brown back and the signature maroon or orange breast. Females are duller in color than males, as is frequently the case in the bird world. Robins are active throughout the day, feasting on insects and worms in the spring and summer and berries and fruits in the fall and winter. Robins are known to locate worms by hearing them underground.
One of the first birds to nest in April, robins usually have a clutch of three to five beautiful, light blue eggs. Chicks hatch in two weeks and fledge two weeks later, leaving room for the second of two to three hatchings.
Spring, a time of growth, renewal, rejuvenation, and new life, is the climatic season that follows the typically three coldest months of the year, winter, and precedes summer, typically the three warmest months of the year. Meteorologists usually define three-month season of spring as March, April and May in the northern hemisphere and September, October, and November in the southern hemisphere. In either case, spring is the result of increasing warmth from the change in the orientation of the Earth�s axis in relationship to the Sun. The astronomical March Equinox is frequently used as the marker for the first day of spring in the north. Erratic, unstable, and severe weather patterns are most common in the spring due to the collision of warm and cool air masses. In the U.S., Tornado Alley is most active at this time of year.
In some regions in the Northern Hemisphere, the astronomical March equinox (varying between 19 and 21 March) is taken to mark the first day of spring, and the Northern solstice (around 21 June) is taken as the first day of summer. Human beings have celebrated the return of the lengthening days of light and the increasing warmth with festivals from the beginning of time. Some of these celebrations include Carnival � South America, Easter - Christian, Passover - Jewish, Holi � Nepal, India, Mayday, Beltane - Europe, Sinhalese New Year � Sri Lanka and Nevruz -Turkey.
Jeanette French, paintings, photographs, canvas prints framed prints, metallic prints, acrylic prints, greeting cards, gift cards, fine art, website, jeanette-french.pixels.com.
Creating portals of light, love, joy, beauty, compassion, hope, and gratitude is my lifelong passion and gift for the earth, hence the name of my art business, For the Earth. My mother painted in oils when I was young and encouraged my own drawing, painting, and handcrafting in all forms. My father, the photographer, gave me my first camera at age 8. As a result of these loving influences, I am a lifelong student of both mediums. I am grateful to my wonderful Pacific NW painter teachers, Stan Capon and Edi Olson, for training my eye and technique. I hope you will enjoy this image as much as I enjoyed its creation. More gifts for the earth can be found at this website, jeanette-french.pixels.com.

Congratulations! Your terrific art has been featured on the ABC Group home page from the I is For Individual week, April 11, 2022 - APRIL 18, 2022 where our images portray an individual person or animal.. You are invited to add your wonderful art in the Features Archive Discussion in the ABC GROUP as a way to preserve your feature!

wow this is so wonderfully beautiful.

Beautiful artwork - so promising for spring