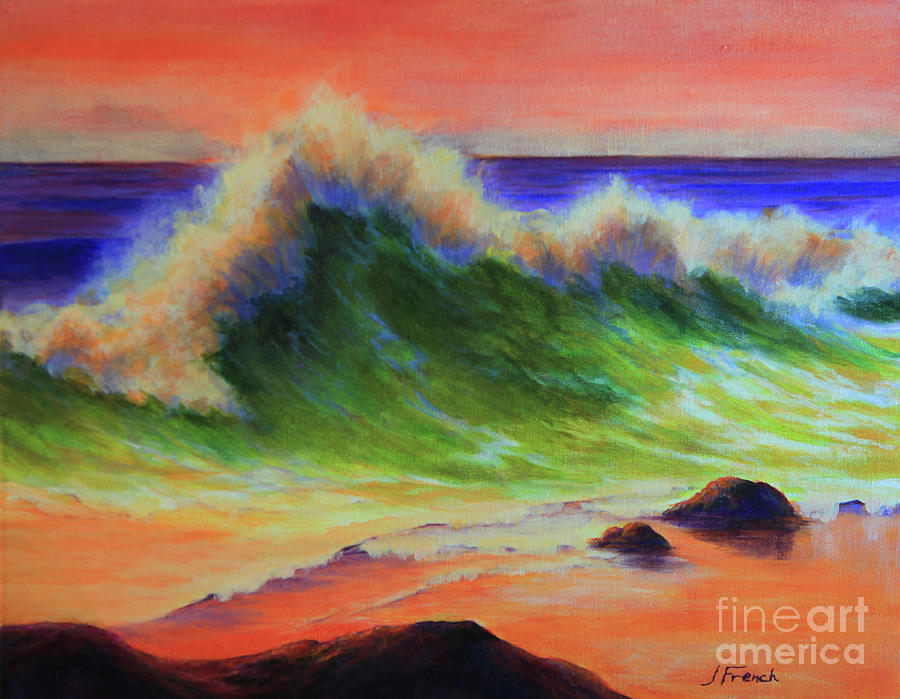 Golden Hour Sea was painted with a bright, full intensity color acrylic palette. I love the golden hour of the evening when the quality of light makes everything appear magical.
Feeling the power of the changing tides collide, I photographed these massive waves in the ever changing light. Physics defines a wave as an oscillation traveling through the middle world of space and matter, transferring various amounts of energy, depending on the size of the waveform. These coastal waves were definitely transferring a lot of energy from one point to another. The air was electric with negative ions, as the incoming high tide crashed onto the beach. This wonderful location is near the small Oregon beach town of Yachats on the Oregon Coast. The forested cliffs meet the sea here in tumultuous union at Devil’s Churn, especially during the November storm track. I was looking for images to paint that would capture the power of this experience of Nature.
The natural, cyclical, tidal rise and fall of sea levels is generated by the gravity pull of the Moon and the Earth alignment, the Earth’s rotation, the pattern of the deep ocean tides, the shape of the coastlines and the depth of the near shore. Tidal variations include two almost equal high tides and two low tides per day, a semi-diurnal tide; one high and one low tide per day, a diurnal tide; or a mixed tide, in which there are two uneven tides in a day.
Surf is the wave action that is occurring in the area between the shoreline and the outer edge of the breaking waves. This is where the word “surfing” came from. Surf can also apply to the waves that are actually breaking in shallow water or on the beach.
Sunset is a magical time, when the day begins to shift to mysterious night. On the West coast, one often sees people called forth near sundown, to stand as silent witnesses to this daily transformation when the sun disappears below the horizon with astonishing speed.
The time of actual sunset is distinct from dusk, which is when the sky becomes completely dark, and twilight, which is the time between sunset and dusk. Astronomers define sunset as the very moment that the last edge of the disk of the sun disappears below the horizon line.
One of the great attractions to sunset is the range of beautiful colors of the sun itself and the surrounding sky and clouds. The longer path of light through the atmosphere, due to the low angle of the sun, often produces colors are quite intense, red, orange, and purple. The colors of sunset are typically more brilliant than those of sunrise, due to more molecules in the air in the evening. The rays of color with shorter wavelengths, like blue and green, are scattered by air molecules and are less visible.
The sun’s setting is variable with the seasonal shifts in the earth’s longitude and latitude and elevation. The latest sunset of the solar year are usually mid-summer, late June to early July, in the Northern Hemisphere and in the Southern Hemisphere it occurs in late November to early December.
Contemporary color in painting is a fairly recent development. Artists have been painting for hundreds of years or more, of course. However, the range of color in pigments was limited, as was accessibility. The brilliant color hues that are available to artists today first appeared in the mid and late 19th century with the onset of the industrial revolution. It was a two part revolution. The first was chemist discoveries of the pure hues like, chrome yellow and emerald green. Later came the cadmiums, artificial ultramarine, alizarine and the pthalos. The second revolutionary invention was the invention of a metal tube with a screw top container, still used today, that replaced relatively fragile animal bladders.
Sweeping style changes began to roll through the artistic world. Impressionists, like Claude Monet, moved outside to paint the land’s light and shadow and in the process play with the interaction of complementary colors. Paintings became about color pattern.
Post- impressionists followed with experiments in subjective color rather than naturalistic Painters like Van Gogh and Gaugin began to flatten depth as well. Interestingly, in the late 1880’s with the onset of the photograph and its precise detail, painting became looser and more powerful expressions of color. The 1950s saw a group of American painters begin to work the style of abstract expressionism in bright colors. Some of this group worked with geometric forms, like Kenneth Nolan and Frank Stella, while others’ works were more organic and virtually formless (Helen Frankenhaler and Estaban Vincente. Bright color remained popular for 50 years and then many contemporary painters returned to browns, grays, black and white. A few artists have continued to play with the vibrant hues and continue to create intense, bright exciting works of art.
Jeanette French, paintings, photographs, canvas prints framed prints, metallic prints, acrylic prints, greeting cards, gift cards, fine art.
Creating portals of light, love, joy, beauty, compassion, hope and gratitude is my lifelong passion and gift for the earth, hence the name of my art business, For the Earth. My mother painted in oils when I was young and encouraged my own drawing, painting and handcrafting in all forms. My father, the photographer, gave me my first camera at age 8. As a result of these loving influences, I am a lifelong student of both mediums. I am grateful to my wonderful Pacific NW painter teachers, Stan Capon and Edi Olson, for training my eye and technique. I hope you will enjoy this image as much as I enjoyed its creation. More gifts for the earth can be found at these websites: jeanette-french.artistwebsites.com and jeanette-french.pixels.com.

Congratulations, your fellow artist chose this work as "Pick Of The Week" in the "Beauty In Art" !! Check out the group gallery and select another artist! l/f

I can feel this and happily breathe it in! Selected for BIA...L/F