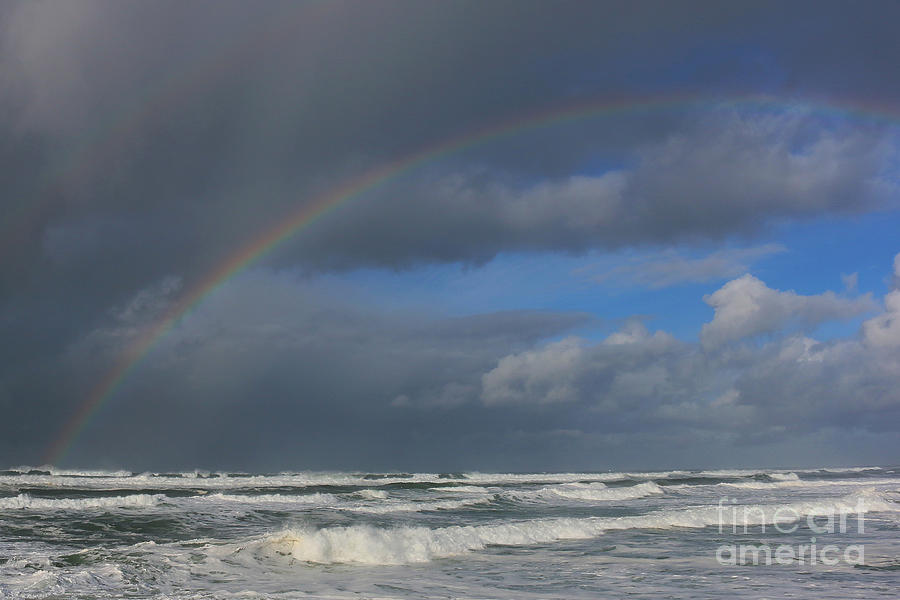 Rainbow Sea
High winds chase the storm tides inland, stirring up great mounds of foam and then chasing them down the beach. This photograph was taken on the Oregon coast during a midwinter storm.
Rainbows have long inspired human beings, as symbols of hope and positive change. As a result, rainbows frequently show up in human culture, mythology, and the arts.
The multicolored spectrum of light that appears in the sky is both an optical and a weather phenomenon. Caused by sunlight reflecting and refracting in droplets of water, rainbows always appear in the area of sky that is opposite of the sun’s position. Although rainbows span a full spectrum of colors, the ones seen by the human eye are usually red, orange, yellow, green, blue, indigo and violet.
The rainbow’s shape is actually a full circle, although the upper half of the arc is typically what we see. There are several different variations of rainbows, moonbows and fogbows. What is known as a primary rainbow will show red on the outside of its arc and violet on the inside arc. A double rainbow appears when the sunlight is reflected two times inside of the water droplets and the secondary arc, outside of the primary arc, will exhibit a reversal of its colors. The red color in both arcs will be facing each other.
One rare form is called a twin rainbow. In this form, the two rainbows emerge from a single base and their colors are in the same order in each arc. Twin rainbows are thought to originate from different sized water drops. Another rarity is the development of tertiary and quaternary rainbows, when light is reflected up to three or four times within the rain drops. They are difficult to see with the naked eye, but have been photographed with sensitive camera lenses.
Another infrequent rainbow form is the stacker rainbow, also known as the supernumerary rainbow. This rainbow is made up of several faint pastel rainbows inside the main arc and sometimes outside also. Interestingly, supernumerary rainbows led to discovering the wave nature of light, first written about by Thomas Young in 1804.
The beach is the shoreline at the edge of a body of water. The landform of the beach is often composed of loose particles like sand, pebbles, shells and shell fragments, the result of the endless deposit and scouring actions of wave and current.
The agitation of seawater by wind and weather creates sea foam, sometimes known as spume. In big storms there can be a breaking up of algae blooms. As the big breaker waves churn along the shoreline, this dissolved organic matter acts as a foaming agent or surfactant, supporting the formation of bubbles that stick together through surface tension. Because of the density and stickiness of this kind of foam, it is easily blown inland by strong on-shore winds.
The angle of the axis of the Earth relative to the plane of its orbit has a big effect on weather. In the Northern Hemisphere winter season, this area is tilted away from the sun. The reverse is true during the summer season.
Meteorological winter is defined by meteorologists as the lowest three consecutive calendar months with the lowest average temperatures. The three month winter period changes, depending on how far north the area is located.
Astronomical winter is defined the position of the earth in its solar orbit. Winter solstice usually signals the beginning of the astronomical winter and the vernal equinox signals the end of it. The coldest weather in the Northern Hemisphere usually follows the shortest day of daylight, winter solstice.
Ecological winter does not use calendar timings at all, focusing instead of the period of hibernating dormancy exhibited by biological forms, both plant and animal.
Jeanette French, paintings, photographs, canvas prints framed prints, metallic prints, acrylic prints, greeting cards, gift cards, fine art.
Creating portals of light, love, joy, beauty, compassion, hope and gratitude is my lifelong passion and gift for the earth, hence the name of my art business, For the Earth. My mother painted in oils when I was young and encouraged my own drawing, painting and handcrafting in all forms. My father, the photographer, gave me my first camera at age 8. As a result of these loving influences, I am a lifelong student of both mediums. I am grateful to my wonderful Pacific NW painter teachers, Stan Capon and Edi Olson, for training my eye and technique. I hope you will enjoy this image as much as I enjoyed its creation. More gifts for the earth can be found at these websites: jeanette-french.artistwebsites.com and jeanette-french.pixels.com.