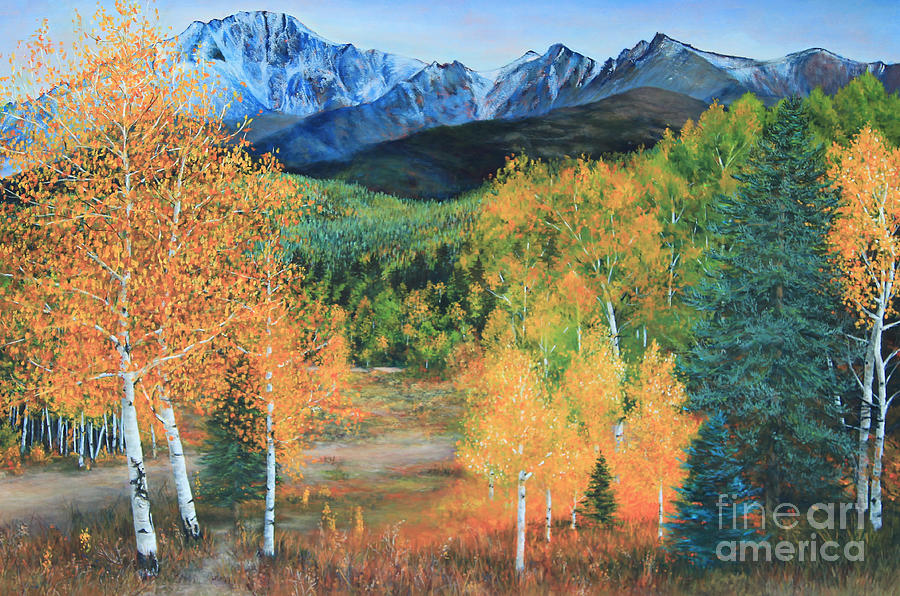 Golden aspens in the fading light of autumn flutter like gold coins and whisper in the slightest breeze. A deciduous native of the high country, the aspen is rarely found below 1500 feet in elevation. Common names for this tall, rapidly growing tree include quaking aspen, trembling aspen and trembling popular. The trees and known for their distinctive mature bark, smooth and pale with black knots, and for their rounded leaves, that turn bright yellow and golden in the fall.
Energetically, aspen groves are symbols for we are one, the connection of all life forms. The individual trees are actually members a colony that share a single root structure. All of the trees in a colony have identical or clone characteristics and are actually a part of one organism. An aspen colony known as Pando is actually considered the oldest living organism at about 80,000 years of age.
Spanish explorers named the great river, Colorado, or Red River, for the color of the distinctive river silt. This state’s geography is distinctive in other ways as well. The range of diversity extends from alpine Rocky Mountains, to the arid Great Plains, from sand dune deserts to deep canyons, from ancient sandstone and granite rock formations to rivers, lakes and lovely forests.
The highest peak, Mount Elbert, 14,440 feet, is also the highest point in the Rocky Mountains. Interestingly, the lowest point in Yuma County is still 3,317 feet in elevation, the highest low point of all 50 states.
The Continental Divine runs along the crest of the Rockies. The Colorado River, that the Spanish discovered, flows southwest, eventually into the Gulf of California. The peaks of the eastern slopes, Longs Peak, Mounts Evans, Pikes Peak and the Spanish Peaks, drain east and southeast into either the Mississippi River or, via the Rio Grande, into the Gulf of Mexico. On the east side of the Rocky Mountains are the high plains, 3350 to 7500 foot elevations. A favorite hiker challenge is to climb all of the 54 founteeners, peaks of 14,000 foot elevations or more.
Although the eastside of the Rockies is mostly prairie land, there are pockets of deciduous forests, buttes and canyons. Ancient indigenous peoples inhabited this region for more than 13,000 years. Pueblo cliff dwellers, Ute, Apache, Comanche, Arapaho and the Cheyenne Nations are some of the tribes that followed the major migration route along the eastern Rockies and lived in the area.
One of Colorado’s fourteeners, mountain peaks of 14,000 or more foot elevation, Pikes Peak was originally named El Capitan by Spanish explorers. The Arapaho Nation called it heeyotoyoo or Long Mountain. Pikes Peak is composed of pink granite, thought to be one billion year old magma that crystalized 20 miles below the surface and was uplifted along with the other Rocky Mountain peaks.
The peak was renamed in the early 1800s for the explorer, Zebulon Pike who led an expedition to the Colorado area in 1806, although he never made it to the top himself. In 1858, gold was discovered in Denver. The whole gold mining area was called Pikes Peak because it was a significant landmark. Pikes Peak or Bust became the clarion call of the first gold rush that followed.
Despite the high altitude, Pikes Peak has long been popular with visitors who have hiked, ridden horseback, driven automobiles or taken the cog railroad train to the summit. One visitor was so inspired by the grandeur of the view from the summit that she wrote a song. America the Beautiful was composed by Katherine Lee Bates in July of 1895.
Jeanette French, paintings, photographs, canvas prints framed prints, metallic prints, acrylic prints, greeting cards, gift cards, fine art.
Creating portals of light, love, joy, beauty, compassion, hope and gratitude is my lifelong passion and gift for the earth, hence the name of my art business, For the Earth. My mother painted in oils when I was young and encouraged my own drawing, painting and handcrafting in all forms. My father, the photographer, gave me my first camera at age 8. As a result of these loving influences, I am a lifelong student of both mediums. I am grateful to my wonderful Pacific NW painter teachers, Stan Capon and Edi Olson, for training my eye and technique. I hope you will enjoy this image as much as I enjoyed its creation. More gifts for the earth can be found at these websites: jeanette-french.artistwebsites.com and jeanette-french.pixels.com.

Congratulations you do beautiful work.

Nice work from a fellow Coloradan! Congratulation on your sale.

Congratulations on your sale!

Congratulations on your sale.

Congrats on your sale!!!

Beautiful! Congrats on your sale Jeanette

Congrats on your sale ! Wonderful autumnal scene you painted.